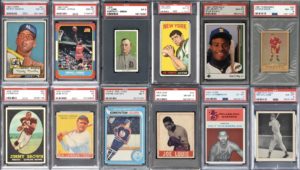 Once you get deep enough into collecting sports cards, you’ll inevitably end up with a hit that’s so exciting you’ll want to get it professionally graded. This is your callup to the big leagues. You could be a contender, you could be somebody!

But getting a card graded can be an intimidating process. There’s a lot to consider when deciding whether it’s worth your time and money. That’s why we’ve put together a resource that covers the basics of grading sports cards.

Who are the major players?

There’s no better place to start than with the companies who will be grading your cards. There are three outfits that are considered the consensus authorities on grading cards: Beckett Grading Services, Professional Sports Authenticator (PSA), and Sportscard Guaranty Corporation (SGC).

Unfortunately, there isn’t any simple and comprehensive way to easily distinguish between the three. All three of them have bolstered their efforts in areas where they were previously viewed as suboptimal. For instance, Beckett used to be better suited for grading current cards, and PSA was considered the authority on vintage cards. However, Beckett has since launched a vintage grading service. Or, another example, Beckett has a more detailed scoring system and that results in higher costs. But, in recent years, it introduced a single grade service that is less nuanced but also cheaper. In that sense, Beckett can compete with lower-cost options like SGC.

Ultimately, the majority of sports cards hobbyists view Beckett and PSA as the two most important graders. Beckett has the most complex grading rubric. PSA doesn’t have a 9.5 grade — it views a 9.5 as redundant — which some people think can hurt a card’s value. But, a PSA 10 will generally have higher value than a Beckett 9.5. As far as SGC goes, it’s usually the cheapest and quickest of the three. However, an SGC-graded card tends to sell for less than an identical card graded by one of the other two companies.

That took two paragraphs to explain this: It’s basically up to personal opinion and the specific circumstance of your card.

What determines a card’s grade?

This is a tough reality of card collecting: Cards don’t start out perfect. We like to imagine that they’re 10s in the pack, and only our careless handling results in them becoming less-than-pristine. That’s not at all the case. Flaws start much earlier.

I watched a box break the other day where the breaker pulled a Cal Ripken Jr. patch autograph that was numbered to 5. It would’ve been a gorgeous card. I say would’ve because Cal smudged his autograph. You just know that instantly that card’s theoretical grade would’ve plummeted. (Hopefully Panini would replace something like this.)

That’s a scenario where a card is obviously flawed right off the bat. It gets so much more nuanced, though. Cards are typically evaluated based on four major categories: Corners, Surface, Edges, and Centering.

Corners are kind of self-explanatory. Everyone wants the sharpest corners possible. This is the area that is usually graded the most harshly. As far as the surface goes, graders are looking for any sort of defect. Scratches, creases, stains, smears — all of these are flaws that will devalue a card. Edges are probably the least important of the four. Sharp edges with a constant color are optimal.

Centering is the biggest wildcard of the bunch. Often, cards are cut so that the image is slightly askew. It’s actually pretty rare to have a perfectly centered card — especially for older cards. That’s the reason two of the three Michael Jordan rookie cards in the 2017 box break weren’t graded as Gem Mint 10s. Ideally, a card’s image will be equidistant north and south, and east and west. The tiniest deviation matters.

What are the benefits of grading?

Those first two sections were pretty heavy. This one’s easy though.

Getting a card graded raises its value because its quality has been professionally certified. This is particularly important for online auctions where a prospective buyer can’t physically examine a card. It’s also a means of ensuring that a card isn’t counterfeit.

How much does it cost?

Hey, we’re back to the confusing stuff!

Again, there’s no clear-cut answer here. Everyone has their own system. At PSA, a card with an estimated value below $500 will cost $20 to grade with a two-month turnaround. But, a card that’s worth $24,000 costs $1,000 to grade and will be expedited in one business day. Here’s PSA’s full pricing breakdown; it’s quite detailed.

SGC is similar to PSA, just cheaper. It’s structured the same way, based on value and how quick you want it looked at. There’s a tier for cards below $250 with a 20-day turnaround that costs only $10, which is pretty reasonable. A card between $20,000 and $50,000 will cost $1,000 to grade with a one-day turnaround. Here’s SGC’s pricing sheet.

Beckett is the lone company that takes a quantity over quality approach. Beckett sections its prices off by how many cards you want graded. Getting a single card graded and sent back in a month costs $25. Sending in 100 or more cards with a month turnaround lowers the price to $15 per card. Here’s Beckett’s prices.

Should I bother getting a card graded?

This is where you need to do some objective decision-making. Getting a card graded isn’t cheap, per se. It’s going to cost you at least $20. If your card isn’t worth that or if it’ll grade poorly, there’s probably no sense bothering.

If you’re taking card collecting seriously — and why else would you be reading an article like this? — maybe it’s time to make a small investment that will make these decisions easier. Buy yourself a loupe. They’re the eyepieces jewelers wear for inspecting diamonds. (It’s probably not lost on you that it’s also our namesake!) Loupes are surprisingly cheap on Amazon; most options run less than $20. Put your treasured cards under the microscope, give them a long hard look, and if they hold up to your scrutiny, send those babies in to get graded.

If you want a second opinion before mailing them off (or if you just want some in-person guidance), it’s worth noting that your local hobby shop most certainly has experience and will help you self-evaluate your cards.

3 thoughts on “A guide to grading sports cards”