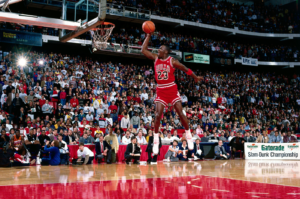 Not all box breaks are created equal. Some are your ordinary weekday livestreams where everyone casually watches and hopes for a big hit. Others raise the stakes tremendously. Boxes that cost thousands of dollars, breaks where something insanely valuable is nearly guaranteed, and events that shatter our perception of the scale of box breaks — these are five of our favorite box breaks ever.

Let’s get the weakest one out of the way upfront. Upper Deck’s 2015-16 All Time Greats Master Collection box retailed for a ludicrous $17,000. This extravagant set came in a beautiful ornate wooden box, and the collection itself was numbered to 200 produced. Inside each box is 59 cards, which includes a full set of 25 autographs and 30 cards that combine to form the Master Collection logo.

While it’s cool seeing the likes of Tony Hawk and Georges St-Pierre featured in a high-value box break, the majority of iconic athletes featured in the All-Time Greats Master Collection probably won’t see their cards commanding a lot of money. The big hits in this break were: a LeBron James Masterful Paintings autograph numbered to 1, a Michael Jordan quad-Diamond Legacy numbered to 15, and a Wayne Gretzky/LeBron James Masterful Pairings dual-autograph numbered to 15. There was some very neat stuff in this box, but the general consensus is that there’s not enough demand to warrant a $17,000 price tag. But it makes for great watching for the rest of us.

This break back in 2015 was both a 10 box break and a 10 card break. That’s because Topps Supreme lives up to its name in being extremely high-end and limited. One pack per box, two cards per pack. May fortune smile upon you.

This particular video is especially fun because it starts with a Luka Doncic rookie on-card autograph with a patch. There are some other big hits like the featured D’Angelo Russell diamond numbered to 2 and Kevin Knox Premium Edition parallel numbered to 4, but nothing compares to pulling that huge Luka card. That alone is worth far more than the $2,000 cost of the box — which comes in a steel briefcase because Panini Flawless is an extremely cool line.

This one isn’t the most exciting or the highest stakes. It’s definitely the longest though. By, like, hours and hours.

Earlier this year, Topps invited top breakers to the Dallas Cowboys’ AT&T Stadium to partake in a mass break for the new 2020 Topps Series 1 Baseball cards. It took 19 breakers more than 9 hours to open a million cards. Breaking boxes is usually fun, but this sounds like a hard day’s work. It makes our list because of the sheer spectacle of it all.

(This video can’t be embedded externally, but you can watch the whole break on Youtube.)

Here’s the granddaddy of them all, the break that was the inspiration for this whole list. In 2017, Vintage Breaks their hands on a fresh 1986 Fleer basketball box, the set that holds the most valuable Michael Jordan rookie card. And Fleer wasn’t stingy with them either; each box contained three or four MJ rookies on average.

Vintage Breaks held a huge livestream break where people bought in at $2,000 per pack. There are 36 packs in a box, meaning that everyone had approximately a 1-in-12 chance of pulling the most iconic basketball card of all-time.

It started off extremely slow as pack after pack went without a big hit. Finally, at pack 19, the first Michael Jordan rookie showed up. It was nearly perfect, as the hosts speculated that we might be looking at a card that would be graded a gem mint 10. Then, in the 29th and 35th packs, two more came out. They weren’t as perfect as the first one, probably getting 9 or 9.5 grades for being slightly off-center.

1 thought on “Five of the most hype box breaks ever”