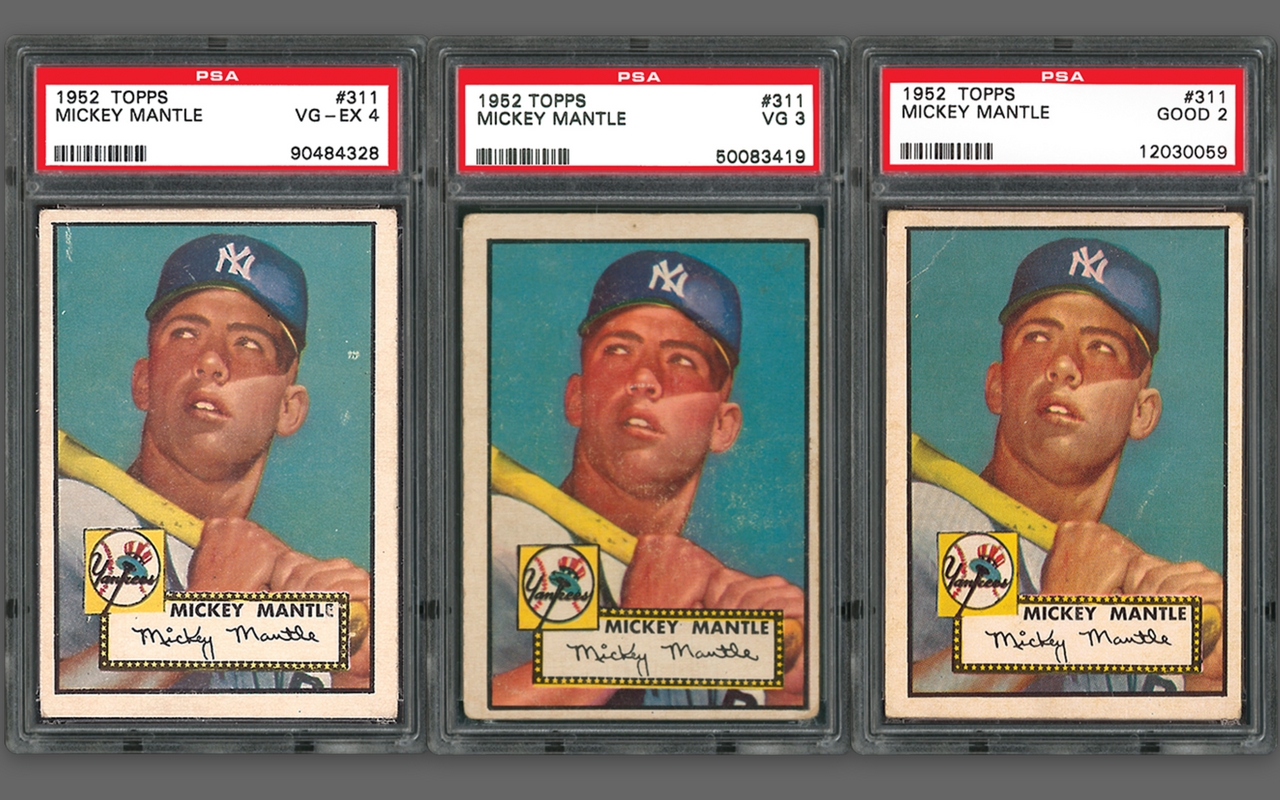 I recently took a big step in my journey to becoming a bona fide card collector: I sent some stuff into PSA to get graded. It’s kind of nerve-wracking for a number of reasons. First, it’s always weird to just take your prized possessions and throw them in the mail. I know people send cards all the time, but there’s always a little voice inside my head that’s like “Yeah, but what if this is the time the mailman gets attacked by a grizzly bear or a piano falls on his head or he drives off a cliff?” Bad news for both the mail guy and my cards.

I’m also hesitant because despite knowing the criteria cards are graded on, I’m an extreme novice at being able to spot those issues. Sure, I can tell if a corner is dinged, but I’m basically just guessing if a card is centered. Or, there can be other surface issues that I glance right over. I think that’s probably one of the roadblocks that dissuades people from getting cards graded. They just aren’t sure if they have a winner on their hands.

Ultimately, I sent them in for the experience of it all. A few months ago, I was opening some retail Upper Deck hockey (Yes, I collect hockey cards), and I hit an Andrei Svechnikov Young Guns rookie and a Dominik Kubalik Young Guns rookie in the same night. They seemed like they were in good shape so I figured what the hell. Let’s send them in to PSA and see how this whole thing goes. If they come back as 10s, each card is probably worth three to five times as much as it was before getting graded; if they’re 9s, I’d probably break about even and gotten the experience. (If they’re 8s or lower, I probably screwed up but that’s life.)

This is how the saga has gone thus far. I haven’t gotten the cards back, but I wanted to share the actual process of getting the cards to PSA.

(In case you missed it, we wrote a primer about card grading earlier this year. Check it out for an overview about the criteria cards are graded on, who the major grading services are, how they differ, etc.)

Listen, I’m just as wary as the next guy about making an account for every website I visit, but there’s no real way around this one. You’re gonna pay them and send them your valuable cards. This is one of those services where you can’t get around making an account.

You gotta figure out exactly what you want

Once you start a submission, PSA is going to ask a decent number of questions. What size is your card? Is this the first time a card has been graded or is it getting regraded? Are they grading an autograph too? (Autographs, which are a separate category than the condition of the card, almost always come back as a 10 unless they’re smudged or something.)

What’s the maximum value of each card that’s getting graded? Now, find the exact card in the database. (Don’t worry, it’s not too daunting.) Figure out if you want PSA to not grade it if it doesn’t hit a certain score.

I didn’t personally experience this, but it seems worth pointing out. Because PSA is so jammed up with submissions, they’ve temporarily done away with their economy tier rate of $20 per card that’s valued at $500 or less. Instead, the cheapest option is to pay $50 per card that’s valued at $1000 or less. That’s going to discourage a lot of people from submitting cards that they’re on the fence about.

So, it’ll cost $50 per card (or more), plus $14 for insured shipping to have them all sent back. If you’re sending in 20 or more cards, you can hit the PSA Value Service where each card is graded for $15. That order will cost a minimum of $300 though. Your credit card won’t be charged until PSA processes it (which will probably be months later).

You need a printer

This is where I was stumped. My all-digital millennial self definitely does not have a printer. But, PSA needs you to send two copies of an order sheet with your cards. I had to hit up a friend and ask him to print a couple PDFs for me. Go to your local library if your friends, like me, refuse to buy a printer.

Wrap those babies up

It’s time to send your cards off. PSA doesn’t want your cards in one-touch plastic cases anymore. I put mine in penny sleeves and top loaders. Then, I put them between two larger pieces of cardboard and rubberbanded the whole thing. I swaddled that all in bubblewrap and put it in a bubble mailer with the order sheets.

Here’s an important and kind-of-funny distinction: Your cards have to be in the exact order that they’re listed on the order sheet. Otherwise, you’ll get hit with a 5% add-on fee. I thought that’d be a hilarious way to spend an extra $2 on my two cards. But, when you’re dealing with dozens of cards in an order, I get why PSA’s graders don’t want to rearrange the whole lot.

That’s the end of my story… for now. USPS got my cards to PSA within a couple of days, and I received an email from PSA confirming that they arrived. However, there has been no movement since and I’m not expecting any for a while. The order hasn’t been assigned any sort of identifiable number, so I think it’s just sitting in a giant warehouse among a million other packages. That has me kind of nervous! Trust the process, I guess.

Everything’s good on my end now. All that’s left is to wait for them to come back, and to keep my fingers crossed for high scores. I genuinely have no idea how long it’ll take because people complained about processing times before COVID wrecked everything. Now the wait times are (semi-understandably) out of control.

There you have it. That’s a quick look at what it’s like to submit cards for grading. It seems intimidating at first, but it’s not too bad once you know the step-by-step. Now the only barrier is that new price increase. A lot of first-time would-be graders might want to wait a bit and see if the price comes down anytime soon. $50 per card seems like a much bigger gamble than $20 per card.