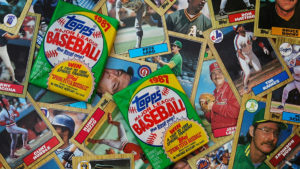 Anyone who has been collecting cards for a long time might take this for granted, but there are a lot of terms, abbreviations, and slang that gets thrown around the hobby. It’s enough to make a new collector’s head spin as they try to piece together all this new information.

That’s why we thought it would be helpful to put together a quick glossary of some of the more prevalent lingo you might come across. If we can help even one person be a little less confused, we’ll have done our job.

Without further ado, onto the vocab lesson: