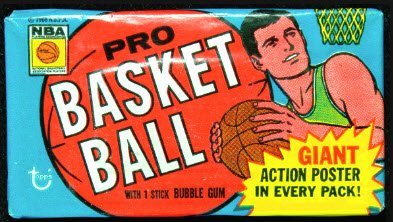 Topps has always loved its inserts.

Decades ago, they were decidedly different in type and quantity and the company worked up a bunch of them. Stamps. Stickers. Decals. Coins. Glossy cards. Team checklists. All of those and more showed up as bonuses inside wax packs.

What they loved more than anything, though, were posters. Chances were good that if you bought a pack of baseball, football or basketball cards in the late 1960s and early 70s, you got a folded poster in your pack. Many a childhood bedroom wall wound up pockmarked with tack holes as kids did what they were supposed to do: hang ‘em up.

Not all of them were mangled, though, and today, vintage Topps posters are some of the easiest sets to complete. Topps focused on stars, too, so there is greatness in every set.

In 1967, they kicked off the baseball season by putting one of 32 posters inside first series packs. The 32-player checklist includes Mickey Mantle, Roberto Clemente, Hank Aaron and Willie Mays. Half of the set consists of Hall of Famers, so this is one of the more expensive sets, but even nice examples are usually much cheaper than an equally high-grade example of the player’s regular issue card.

There were insert posters in 1970 baseball second series packs, too. This time, they were larger and included two images: a head shot and an action photo. For some reason, the checklist isn’t quite as star-studded, although Clemente is here, along with a young Johnny Bench.

Topps had recaptured the NFL and AFL trading card licenses by 1968 and inside packs of its first series that fall, they produced a 16-player poster set that measured 5×7”. Among the least expensive poster insert sets of the era, the ‘68 set includes some greats as well as some guys only series football fans will recall. Johnny Unitas, Bart Starr and Gale Sayers are the biggies.

After a year off from posters in ‘69, Topps came back with an artsy football insert poster set in the second series of its 1970 set.  Quite a comedown from its beautiful glossy card inserts that were in Series 1, the posters are pretty generic in nature thanks to the decision not to use actual player photos. If you’re going to skip a vintage poster insert set, make it this one.

In ‘71, posters were back in football packs. They were smaller, featured photos and the backs served as a “playing field” for a game played with a second insert of game cards featuring 52 players.  The poster set had 32 players and was jammed with superstars like Starr, Unitas, Sayers, Joe Namath, Bob Griese and Dick Butkus. Countless youngsters whiled away an afternoon or evening playing the simple game. It was genius but sadly, Topps didn’t continue the idea beyond 1971.

You can also find posters in Topps’ 1970-71 basketball cards. With the increased interest in collecting both modern and vintage basketball, these large posters have risen in value quite a bit over the last couple of years. The checklist is almost entirely made up of Hall of Famers.

Topps took a long break from posters as the decade wore on but also used them in their 1980-81 basketball and hockey packs, with the much less exciting concept of team photos.

Topps loved posters so much they even created standalone sets that were sold via wax packs. The 1968 and ‘72 baseball posters were much larger than what was found inside wax packs, with a great checklist of icons.  Distribution was geographically limited and they’re among the most valuable insert sets of all-time. Displaying them is a challenge.

Just don’t tack them up on the wall.

2 thoughts on “How Topps posterized packs back in the day”