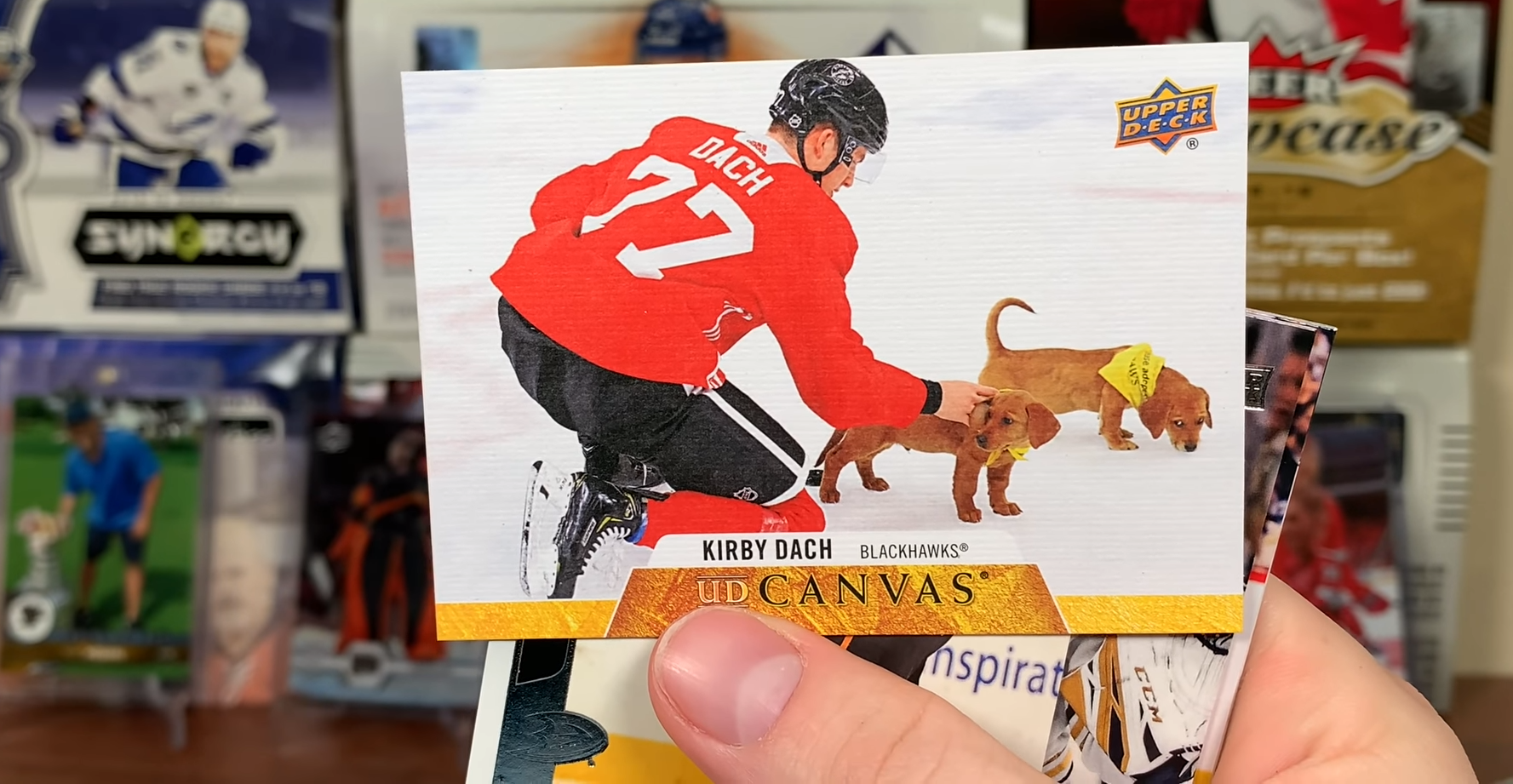 For his second year UD Canvas card, Blackhawks centerman was photographed playing with some dogs on the ice. Canvas is an alternate set to the base set, and most cards feature some really neat behind-the-scenes photography. Dach down on his knees playing with pups is the absolute best.

Sports cards have a long and rich history of featuring doggos. Here are some good boys throughout the years who have melted hearts.

Art Whitney and a Good Boy

Let’s start with the most classic and iconic example of dogs making their way into sports cards. In 1887, Old Judge Cigarettes released this card of journeyman baseball player Art Whitney and his pup Midget.

It’s one of the better-known photos in card history, and it’s also one of the cutest. To that end, it’s also rather expensive. There are around 100 copies of this card, and they seem to sell for at least a few thousand dollars. A worthwhile investment for man’s best friend.

In 1993, Milk-Bone dog treats really leaned into the whole dogs-with-baseball-players angle. It released a 20-card set of MLB stars with their pups.

At the time, card photography was usually too self-serious and all about the professionalism of athletics. This was the rare opportunity — albeit branded and sponsored by a product — for athletes to show their personable side.

If you want to see the full gallery of Milk-Bone’s finest, Beckett has pictures of the full set.

Larry Walker and a Good Boy

I like to think those Milk-Bone cards busted down the door for baseball players to snuggle up against dogs. The 90s had some more prominently pictured pups on cards, but this one’s my favorite.

This ’98 Upper Deck photo has Rockies star and Hall of Famer Larry Walker rolling around in the grass with a dog named Frolics. It’s Spring Training, everyone’s just chillin’ out under the Arizona sun, and Frolics is gettin’ some good belly rubs. This card is nothing but good vibes.

Alexander Ovechkin and a Good Boy

We’re back to hockey because there’s a very handsome boy hanging out with a toothless legend. The Washington Capitals team dog Captain got his picture taken with Caps captain Alexander Ovechkin while walking down the street. He looks a little unsure of it all, but he’s in good hands.

Fun fact about this card: It’s a super short-printed base card photo variation where the players are in suits. Upper Deck included them in one out of every 1,000 packs. There are 30 cards in the set, so your chances of pulling Ovi and Captain is approximately 1 in 30,000. Those are criminally bad odds for a card that could bring joy to everyone.

“Hey, Brett! You idiot, Brett! That’s a cat, not a dog!” You might be screaming this at your phone right now. You’re right but you also look crazy.

Zilla lobbied for the inclusion of this black cat that made its way onto the field during Dallas’ Monday Night Beatdown of the New York Giants back in 2019. It adorably captured hearts, and Panini was quick to give the kitty its own rookie card. Good 40 time and vertical leap, but undersized and minus receiving skills due to lack of opposable thumbs.