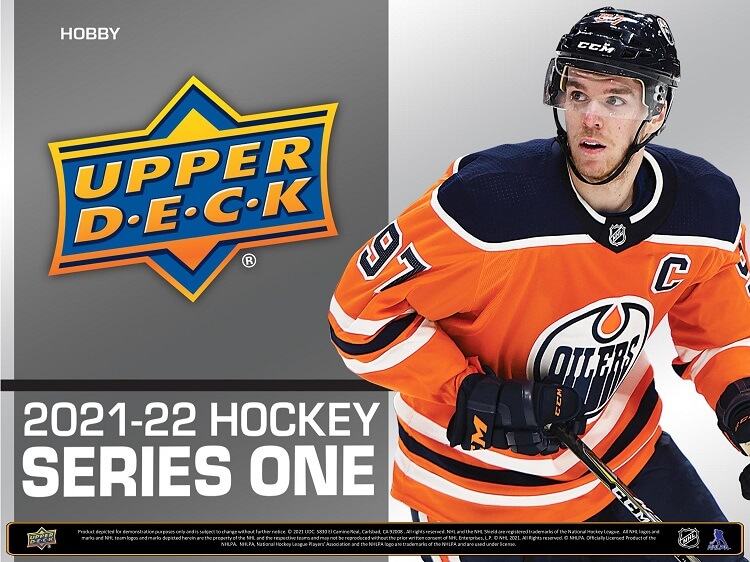 No, that’s not a typo. Despite it being nearly March, Upper Deck is just now releasing Series 1 of its flagship cards — even though we’re at a point in the season where Series 2 should’ve already launched. But, we’ll look at it with a Glass Half-Full approach; it just means Series 2 and Extended aren’t far away.

Upper Deck’s flagship hockey has one of the sport’s biggest base collections — I believe MVP is the only one that trumps it in sheer quantity — and we get the typical 200-card veteran set again. Of the eight cards in each pack, expect seven base to show up, alongside one hit.

As for that one hit, there’s a good mix of old and new inserts in Series 1 this year. Standbys of years past like Canvas, UD Portraits, and Dazzlers are all back. (For my money, Dazzlers is one of the best-looking inserts in Upper Deck’s repertoire.) New inserts like Electromagnetic and Hundo P join the fold, replacing the likes of Predominant and Worldwide Leaders from last year.

Let’s be real though: Upper Deck Series 1 and 2 are almost entirely about chasing Young Guns. It’s one of the most iconic rookie staples in all of cards. As usual, this is a 50-card Young Guns set (49 rookies and a checklist), and they land six per hobby box. If you’re lucky, you might exceed six by hitting a Canvas Young Guns, Clear Cut Young Guns, Young Guns Exclusives (numbered to 100), or a Young Guns High Gloss (numbered to 10).

So who are we hunting? Anaheim Ducks center Trevor Zegras is the odds-on favorite to win the Calder as the NHL’s Rookie of the Year. Montreal Canadiens forward Cole Caufield is another highly-touted prospect who’s certainly one of Series 1’s biggest pulls. There are plenty more guys who have stuck in the big leagues (it’s already March, after all) but you can also look to Spencer Knight and Jeremy Swayman as two goaltending prospects who have promising careers ahead of them.

Frankly, Upper Deck’s flagship is not the product for anyone who favors autos and jersey cards. Autographs are extremely tough pulls, to the point where Upper Deck hasn’t really outlined them ahead of launch except for some super-limited Canvas hardsigned cards. Relic cards seem to fall approximately 1 in every 3 hobby boxes.

That being said, it’s not really the focus. Outside of a few exceptions, you’d much rather hit something like a Clear Cut Young Guns that a veteran’s jersey card.

There are a lot of hockey products throughout the year, but few give collectors as much joy as the release of Series 1. It’s simply an iconic product, and it’s the debut of this season’s true rookie cards. If you’re one of Loupe’s hockey fans, make sure to hop into the shops that carry Series 1 and show your love for one of Upper Deck’s longest-standing traditions.