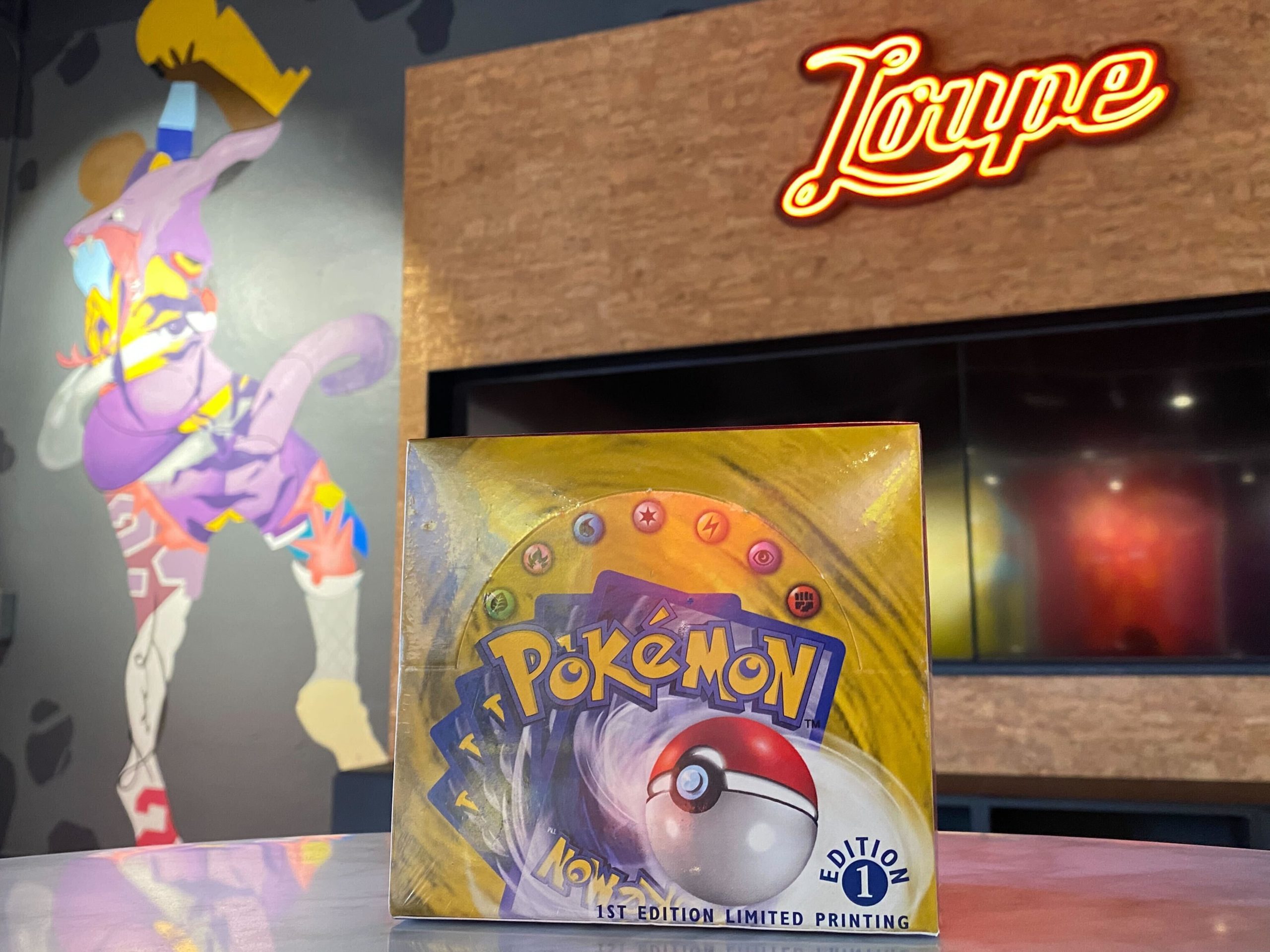 What’s good, Loupers!? We are less than 24 hours away from the biggest box break in Loupe history this Saturday, November 6. We’re throwing a party on Loupe as we livestream the break from our headquarters in Miami. Before that, we want to prep you about what’s going to come out of the box. Here’s the breakdown of the 10 most valuable 1st Edition Pokémon cards, based on the going rates for PSA Gem Mint 10s.

First up on our list at number 10 is Alakazam. This final form psychic card is widely regarded as one of the more intriguing cards of the deck — with its unique powers to reduce the health of its opposition and damage swap with its enemies.

The Gem Mint 10 first edition holographic Alakazam is currently valued at $15,000 by PSA, and just last year, one went for over $20,000 in an auction.

At number 9, we have the fighting type Pokémon, Hitmonchan, and the name is self-explanatory. Hitmonchan stands at a feisty 4’7″ with what resembles boxing gloves for hands. He is known for his relentless spirit in battle with attacks that launch a flurry of punches. This card is beloved by the community, and it shows in the market. Just last November at Gem Mint 10, Hitmonchan was sold for $23,100 in an auction.

The fox-like Pokémon, Ninetales, stands alone at number 8. The Japanese folklore-inspired creature is considered not only fierce but also quite intelligent. Along with each tail believed to be able to carry its own, unique mystic power – it can also understand human speech.

PSA values this 1st edition Ninetales to be worth 18,000 in perfect condition; most recently, they have missed that mark and have only sold for as high as $15,500.

We have dual-type Gyarados as our seventh most valuable card. These blue and yellow serpentine Pokémon with nearly impenetrable scales going down his back are highly destructive with their short temper. While PSA values this water and flying type Pokémon at $18,000, much like Ninetales, it had a little less success in the auction as of late, selling at $16,570 last year.

Next on the list at 6 is the 1st Edition Holographic Raichu. The final form of the beloved Pikachu uses its tail to store electricity from the atmosphere. According to PSA, a Gem Mint 10 Raichu is valued at $20,000 and has sold for over $34,000 in the last year.

The psychic type legendary Pokémon, Mewtwo, starts our top 5. This scientifically-engineered creature is one of the most dangerous of all, where it uses its abilities like telepathy and mind control to defeat its foes. As for its value in the market, PSA’s Sports Market Report (SMR) has this Gem Mint 10 1st Edition holo Mewtwo worth $20,000.

At number 4, we have the dual grass and poison type, Venusaur, on the board. Venusaur is the evolved form of the original Bulbasaur with the ability to harness sunrays as energy and manipulate nature.

As one of the most recognizable Pokémon of all-time, it’s no surprise that it is this high on the list. In perfect condition, PSA has this card worth $22,000. Just this year, one was sold for $60,000.

Chansey, the pink and loveable Pokémon with its remarkable healing abilities, sits at number 3 on our list. This card is beloved by collectors. PSA’s SMR values the Gem Mint 10 1st Edition holo Chansey to be worth $35,000 today.

Our runner-up for the most valuable Pokémon card of all-time is none other than Blastoise. As the final evolution of an original starter Pokémon, Squirtle, Blastoise’s unique design with blue skin, a hard shell, and cannons on his back can severely damage his opposition with water blasts.

But his value in the market is just as serious. Due to its rising popularity after being featured on the cover of the Pokémon Blue video game in 1998, Blastoise’s value continues to reign high among the majority. For example, PSA values Gem Mint 10 1st Edition holo Blastoise to be worth $60,000 today; last November, it was sold for $80,000!

Finally, the consensus most valuable Pokémon card of all-time has to be the 1st Edition holographic Charizard. Like Blastoise, this final evolution of Charmander dons the Pokémon Red video game cover (the counterpart to Pokémon Blue). Its domineering stature with its large wings and fire abilities are a fan favorite to this day. It’s also the most powerful card in the deck.

The popularity of Charizard soared and has been untouchable ever since. Despite PSA valuing the Gem Mint 10 card at $275,000, we have seen this very card sell for much more. Just this year, in April, we saw it go for $399,750. So ultimately, it’s safe to say that Charizard holds the title as the most valuable 1st Edition Pokémon card ever and won’t relinquish it anytime soon.

3 thoughts on “Rank ’em All: The Most Valuable 1st Edition Pokémon Cards”