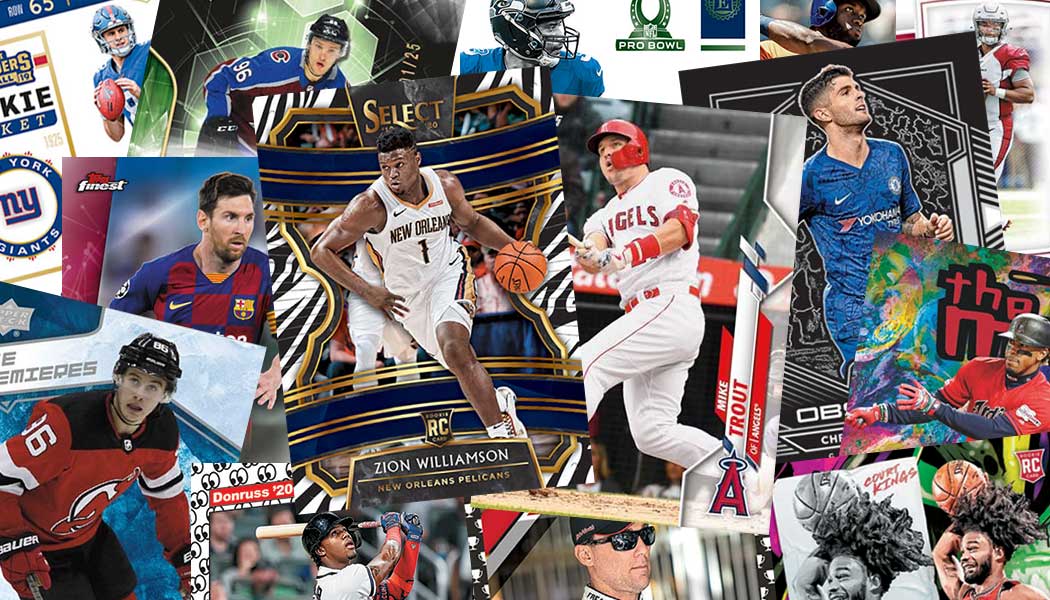 What. A. Year. We can say that completely without hyperbole for once. It was probably the weirdest year of our lives — at least collectively — and cards were the one thing that kept a lot of us sane.

As we’re ready to slam dunk 2020 into the rearview mirror (and the dumpster), let’s take a look back on some of our favorite products of the year.

Panini One and One

One of the highest end Panini products is one that we also fell in love with. Notice how many times I say “one” in the last sentence. I guess if this were an R.E.M. song, it’d be “The One and One I Love.“

Panini’s One and One released at the end of November and quickly exploded in popularity. It’s a gamble, for sure. One box contains only two cards, and it’ll run you about $1,000. But as @chest points out on Twitter, the Downtown and Timeless Moments inserts are among the best in recent memory. Downtown features an artists rendition of a superstar backdropped against the sights of the city they play in; Timeless Moments capture an epic moment of victory with a player’s on-card auto. They’re both simply incredible and elevate One and One among the best of 2020.

This summer, I could not get enough Bowman Sapphire breaks. Something about them kept drawing me in. Maybe it was how starved I was without watching the boys of summer, maybe it was how gorgeous these cards are.

Whatever it was, I kept watching. This stacked prospect class features the likes of Bobby Whit Jr., Robert Puason, Adley Rutschman, Luis Robert, and, of course, Jasson Dominguez.

Oh, speaking of, the Jasson one-of-one autograph was just pulled a couple days ago by Midwest Breaks (who’s no stranger to streaming on Loupe). Congrats to the lucky dude who pulled that monster.

This product is so good that we gave it its own dedicated post a couple weeks ago. Still, we’d be remiss to leave it off this list altogether.

Topps commissioned artists to remix some classic cards, and the result has been fascinating and fantastic. We’ve already highlighted five of our favorites, but it’s worth checking out all the Project 2020 cards.

While these ones are in high demand just like all cards right now, you won’t be chasing boxes and hoping to get lucky. Topps just sells these individually, so you know what you’re getting. However, you still have to be lucky enough to actually place an order.

I’m a sucker for Topps Stadium Club because it’s everything I want from a baseball card. It’s a lot of cool photography, usually showing players doing something fun, or with grandiose wide-angle shots.

I love pulling my favorite players. Who doesn’t? But I really love when a card makes you linger for an extra second as you take in everything that’s happening. Topps Stadium Club does that.

Why Chrome though? When in doubt, Chrome it out. Sage-like advice.

One of the last football products of the year was also one of the best. Panini Prizm lit Loupe on fire all of December. Everyone was chasing Burrow, Tua, and Herbert autos. We hit our share of big ones.

Prizm has it all. Cool inserts, snazzy designs, and a premium price tag that guarantees the hits go for big money. Prizm might’ve been the first product that felt like it brought the Loupe community together as everyone went hunting for the huge names. Here’s to many more in 2021 and beyond.